Interview – How to… photograph in burrows

From BBC Wildlife magazine. How to… photograph in burrows. 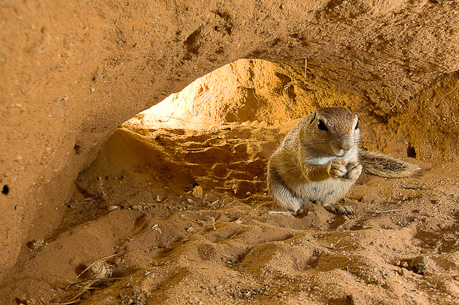 Ground squirrels may be common over large parts of Africa, but that doesn’t make them easy to photograph, particularly if you want shots of them in their burrows. Stefano Unterthiner explains how he went underground in the Kalahari Desert.

I really wanted to get photos of the ground squirrels in the habitat in which they spend most of their time – their burrows – but I hadn’t done this sort of photography before, so I had to experiment before I got it right. In the end, I put my camera in a plastic bag to protect it from the sand and placed it in the main entrance of the burrow. I then lay down (in a very uncomfortable position) in order to focus the camera and get the right exposure. Finally, I covered myself with a blanket to prevent sunlight from coming through to the burrow – this was to give the impression that I was actually inside it.

I had already placed a remote flash in one of the secondary entrances, and I had another on the camera, so that’s how I lit the shot. It took two hours to get the image I wanted.Though the squirrels in the camp where I was based are accustomed to tourists, they are nervous when close to their burrows and it took them a few days to accept me. I lured them where I wanted them with biscuits.

Working conditions were tough. During the day, the temperatures rose to between 35 and 40˚C, and at night they dropped to -10˚C. But the main problem was the sand. Between 10am and 4pm each day, it was very windy, and the sand blew everywhere, even when I was in my tent. I often had to download images in the campsite’s lavatory or take a siesta in my car.