The largest population of Sumatran rhino in captivity has been annihilated! The five rhinos at the Sungai Dusun centre (Malaysia) have died during the last weeks (28 October to 16 November). The cause of this tragedy is not yet verified but is probably either a very virulent and infectious disease or an environmental toxin. 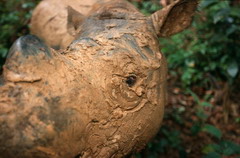 THE CONSERVATION STRATEGY FOR SUMATRAN RHINOS

The Sumatran rhino has been a critically endangered species for at least the last 25 years because of massive destruction of its habitat and rampant poaching for its horn, which is used in traditional medicines. Efforts to protect the rhino in the wild have been in progress for many years in both Malaysia and Indonesia.

These efforts have intensified since 1995 with the formation of Rhino Protection Units (RPUs), anti-poaching teams, which are operating in the three main areas where the rhino still exists:  Peninsula Malaysia, Sabah, and Indonesia.  The RPU program is and has been the most important (especially in terms of resources) component of the strategy to conserve the Sumatran rhino.  The Wildlife Departments and their conservation partners invest at least five times as much money on protection in the wild as in the captive propagation programs. However, the protection of this species in the wild has been increasingly difficult and uncertain due to the rapid development as well as the periodic economic and political instability in its homelands. Hence, as early as 1983, the IUCN (World Conservation Union), its Species Survival Commission (SSC) and its Asian Rhino Specialist Group (AsRSG), as well as the Wildlife Departments of Peninsula Malaysia, Sabah, and Indonesia decided that a diversified strategy was important to ensure the survival of the Sumatran rhino.  This diversified strategy comprises not only the attempts to protect the species in the wild but also to propagate the species in captivity.  Captive propagation has been a significant and successful tool for the conservation, indeed the salvation from extinction, of many species including the Asian Wild Horse, the Arabian Oryx, the California Condor, and the Black-Footed Ferret.  Moreover, in the case of the Asian Wild Horse and the Arabian Oryx, the captive and now reintroduced wild population have recovered from fewer than 10 captive breeders in each case. Consequently, captive propagation programs for this species commenced in Peninsula Malaysia, Sabah, and Indonesia.

In all three areas, the programs entailed cooperation with zoos in the United States and Europe which had much experience and success with the reproduction of three other species of rhinos: the African black, the African white, and the Indian rhinoceros.  Animals for the captive program were individuals considered “doomed” in the wild, i.e. they could not be protected under existing threats (e.g. total destruction of their forest habitats) with available resources or were not part of populations large enough to be viable (e.g., in some cases, they were lone animals in remnant patches of forest). Unfortunately, the Sumatran rhino has proven the most difficult species of mammal to reproduce and even to maintain successfully in captivity.  In general, the reproductive biology of the rhino family is different from other hoofed-mammal species with which humans have experience because there are domestic counterparts:  cattle, sheep, goats, camels, deer, pigs (which are not closely related to rhinos), and horses (which are more closely related to rhinos but still quite different.  Moreover, even among the Rhino Family, the Sumatran seems more complicated than the other species.  It is the only rhino species discovered to be an induced ovulator.

Nevertheless, after 20 years of effort, the program has succeeded in reproducing this species.  The Cincinnati Zoo produced a calf in 2001 and the female there is pregnant again and in her second trimester of the 16-month gestation period. There has been much attempt to exchange experience and expertise among the facilities with the Sumatran rhino, especially Sungai Dusun and the Cincinnati Zoo.  Additional help for program at Sungai Dusun has been provided by the AsRSG, the International Rhino Foundation, Fossil Rim Wildlife Center (which propagates both African species of rhino and whose veterinarian Dr. Robin Radcliffe is well recognized as an expert in rhino reproduction). Regrettably as the art and science of maintaining and reproducing the Sumatran rhino in captivity has evolved toward success, the animals have grown older and more vulnerable to the various afflictions of age.  A particular problem with Sumatran and other rhinos is that when females do not reproduce for long periods of time, they develop tumors and other so-called pathologies in their reproductive tracts that render them infertile. A further reality is that small populations, whether they are in captivity or in the wild are subject to chance or stochastic catastrophes, such as occurred at Sungai Dusun over the last couple of weeks.

Despite these setbacks, many of the Sumatran rhino conservationists believe we must persevere to develop a viable program of captive propagation as a supplement and back-up to the primary program of protecting the species in the wild against ever increasing odds.  Hence, the program at the Cincinnati Zoo and at the Sumatran Rhino Sanctuary in Way Kambas National Park will continue.  For now, the conservation program for Sumatran rhino in Peninsula Malaysia (where perhaps 75-100 rhino survive in the wild) will concentrate on the RPUs.